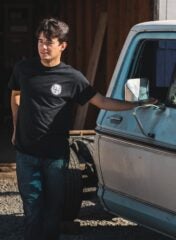 Just like rock or jazz is to pop, pickup truck racing runs counter to stock car racing’s mainstream appeal. Modern fans love the rebellious nature of the sport. The trucks look different, drive different, and take fast and furious racing to another fun level of spectacle. But what many don’t know, Israel Acosta says, is where NASCAR’s current version of the sport got its start.

As the story goes, Bob Harmon and sponsor Dick Moroso stepped up in 1984 and renamed it the Performance All-Pro Truck Series. That run, too, soon ended after health issues sidelined Harmon. NASCAR revisited the idea in the ’90s, and the “Truck Series” we know today was born.

Growing up in tiny Cistern, Texas, midway between San Antonio and Houston, Acosta developed a passion for pickups when he was young. “I started busting knuckles early and first learned to drive a pickup on our ranch when I was 8 or 9,” Acosta says. When the truck needed to be fixed, he remembers holding the light for his dad. “When I wasn’t getting yelled at for not holding the beam steady, I learned how an engine works.”

Acosta’s father worked on a cattle ranch nearby, and Acosta helped where he could until the ranch hired him when he was 12. As a junior in high school, he was gifted one of the trucks—a 1979 Ford F-100 Custom—which had become a touchstone for so many memories and good experiences he’d had at the ranch.

“I loved sports in high school and thought I might go into sports marketing in college. At the same time, everybody knew me for my truck. I always loved working on it, loved the power and making it go fast.”

One month before graduation, Acosta realized the traditional college track wasn’t for him. The circle track called instead, especially when he began learning about the history of NPTRA. “Those early racing pickups used factory-production chassis and bodies, not tubular frames and fiberglass bodies,” he says. “To me, that allows the truck to still feel like a road vehicle that can also race.”

If Acosta were confined by modern NASCAR rules, he adds, he wouldn’t have much left of the original Ford. And that’s at the heart of what made early racing pickups so enticing—that he could re-create a truck capable of running two-hour races at average speeds of 110 mph. All Acosta needed was some expertise in metalwork, fuel, and electrical systems, paint work—all the restoration and mechanical skills necessary to transform his beloved Ford, in other words.

“The RPM (Restoration Preservation Mentorship) scholarship I received is helping me get my bachelor’s degree from McPherson. And that’s paving the way for me to complete my personal project. I have dreams of racing my truck at Laguna Seca one day. But I also love exploring the hypothetical. My objective is to show people that you can have a lot of fun with old drivetrains and traditional chassis and explore just how far Baker’s original idea could have gone.”