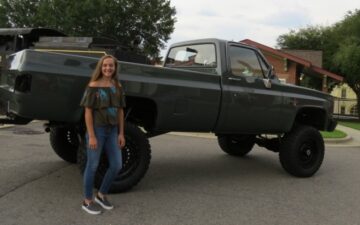 Kassidy Nixon, of Lillington, North Carolina, was only 15 when she got her dilapidated 1984 Chevy K10 pickup. But she had a supportive family and the kind of unique mechanical confidence that comes when you’re a homeschooled farm kid who grows up fixing stuff with your dad.

Nixon grew up surrounded by old machinery. When something broke on the farm, you didn’t replace it—you fixed it. “We never carried any vehicle to a shop for repair,” she says. “Ever since I was 8, holding the light under the hood for my dad, we’d sit with a problem until we figured it out.”

To complement her homeschool education, when she was 16, Nixon started at Central Carolina Community College (CCCC) in nearby Sanford. During a career-day event at the school, she noticed an “Automotive Restoration” sign on a door. Nixon and her mom walked in and got some handouts from the course instructor, Kiel Rhodes, and immediately, Nixon knew that’s what she wanted to do.

CCCC has a small fleet of old cars for students to learn on. But seeing Nixon’s excitement about rebuilding her K10, Rhodes let her bring the pickup to class and work on it throughout a yearlong curriculum on welding, painting, upholstery, metal, electrical, and engine work. Rhodes says Nixon quickly set herself apart as a leader. “When I’d ask for a volunteer to perform a task, others were often silent, but Kassidy always stepped up. She’s a determined young lady with a lot of charisma that people gravitate toward.”

Nixon liked learning about the development of cars and how to keep old ones running. “I loved the artistic nature of interior and body work, particularly the reshaping of metal.” She’s enjoyed great success already: In 2020, Nixon was a finalist with TechForce Foundation’s FutureTechs Rock campaign and a runner-up for the 2019 Collision Student of the Year award from the Collision Repair Education Foundation.

RPM has been a longtime supporter of CCCC’s automotive program, and in addition to granting Nixon a scholarship, Rhodes says RPM money helped buy the school a spray booth for painting classes. Over the years, RPM has helped many students find internships and—what Rhodes considers most important—has shown his small-town student body the limitless possibilities open to those in the restoration profession.

This year, Nixon graduated with a diploma in restoration, collision, repair, and refinishing. She dreams of opening her own local shop and is already taking on projects at her family’s home garage. “The nearest restoration shop is an hour away, so there’s opportunity here. Right now, I’m doing a custom paint job on a Silverado and body, upholstery, and paint work on a 1970 C10.”

Kassidy Nixon was raised to respect tradition, and old cars provide a deep connection to the way she grew up. Making a career close to home will allow her to maintain a connection to the people she knows best while also making a difference in a smaller place.