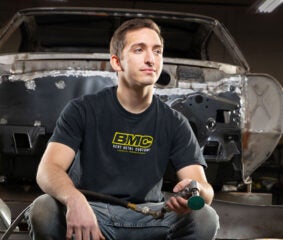 When he was 14 years old, Kevin Kyle bought a rusty Chevy S-10 pickup for $500 and another one for parts. His stepdad owned a hot rod shop, so together the two did all the needed body work—new fenders, new doors, everything. Kyle took his driver’s test in the S-10, which he still drives today.

In school, however, he never took any tech courses. “I was actually on a college prep track, thinking about becoming a mechanical engineer,” he says.
A motorsports-focused program at the University of Northwestern Ohio’s College of Applied Technologies caught his eye—a tech-heavy track focused on engine building, understanding fuel systems, and high-performance transmissions. Kyle applied and was accepted, but as the end of high school drew near, he had reservations about leaving his hometown of Hatboro, Pennsylvania. “I started thinking it would be nice being closer to home,” Kyle says. “I also realized I liked the fabrication work and problem solving of restoration.” That’s when a last-minute field trip to nearby Pennsylvania College of Technology put him on his present course.

In addition to its financial support of students and restoration and preservation educational programs, RPM has developed a nationwide network of ambassadors and professionals dedicated to helping young people find their way in the industry. One of those industry guys is Jim Denney. He operates Auto Tech Systems in St. Louis. Denney had tapped RPM for leads on skilled intern talent in the past and was impressed. So when his sister, Kyle’s mother, mentioned her son wasn’t too keen about a move to Ohio, Denney suggested she call RPM to ask about other options.

“My mom and I knew about Penn,” Kyle says. “We drove through the campus once, but I didn’t have a clue a restoration program existed there until the RPM Foundation told me about it.” He applied, got in, then started looking for summer work. RPM came through again, hooking him up with an internship with Allentown’s Ken Beck of K&T Vintage Sports Cars, along with a seven-week gap-fund scholarship.

Kyle mastered basic engine work at Penn. He even built a new mill for his trusty S-10 in one class project. After graduating with an associate’s degree in 2018, Kyle landed a job with Bent Metal Customs in nearby Lansdale. “Two days after I got my diploma, I started work at the shop, which is less than 30 minutes from my home.” As part of a 10-person crew, Kyle focuses on modern pro-touring builds. “We regularly show cars at SEMA and do a lot of work on Camaros, Chevelles—modern drivetrains and high-end stuff,” he says.

In his spare time, Kyle is hard at work on his other car, a he got when he was 15. “My mom and stepdad bought it for me as a gift,” he says. “It’s my favorite model, but I didn’t have the time or knowledge to work on it then. Now, with the skills I learned at Penn and my new job, I’m doing a Trans Am–style build.”

Kyle says his future is a work in progress. Maybe someday he’ll open his own shop. Maybe he’ll get back to his hot-rod roots. “Right now, I like what I’m doing—working metal and shaping things,” he says. “It’s really what I’ve always wanted to do.”