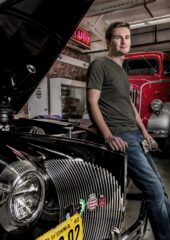 At his internship gig in Auburn, Indiana, Lucas Cauley has learned that not all historical research is created equally.

Two to four times every week, 22-year-old Lucas Cauley breaks from his grad-level history studies at Ball State University in Muncie, Indiana, to make an 80-mile trek north. There, at the Early Ford V-8 Foundation Museum in Auburn, he’s part of the team working to keep 51 Fords built from 1932–58 up and running.

“As a collections and curatorial intern, I work on vehicles, I catalog donations, and I process historical material like the museum’s massive collection of Ford records, LPs, and reel-to-reel films,” Cauley says. “I also build exhibits like the one I recently put together on Ford tires between 1936 and 1941.”

Prior to his internship, Cauley was not what you’d call a car guy, and he had no experience with old cars, so the work might seem a strange fit. As an undergrad, he carried a double major in anthropology and public history. The “public” side of history is not academic. It’s not about teaching in a university, he says. Public historians work everywhere else—museums, historical societies, national parks—interpreting history and making it accessible and useful to the public.

“It’s always tough making old papers and artifacts exciting and relevant in young peoples’ lives,” he says. “Especially now, in the digital age. But with old cars, I’ve discovered you can put history right in someone’s face.” Before he could do that, however—and just like most of the people who have come through the internship program—Cauley first needed to learn how to operate a manual transmission.

“Nine years running the program and we’ve only had one intern who could drive a manual,” says executive director Josh Conrad. “And that’s the way we like it. Young people without prior experience are easier to train. They have no preconceptions, and they don’t have the shop mentality that says everything has to be done fast.” In that regard, Cauley is a model intern.

His internship—fully funded by the RPM Foundation—comes at a time of major expansion at the museum, and it serves as an educational model for the future. “Part of our big plan is to launch a hands-on school,” says Conrad, who aims to attract more young people like Cauley who have a “ferocious curiosity” for history and preservation. “Students coming into the program will start by learning basic mechanics, then advanced mechanics along with everything else that goes into running the collections side of a working museum.”

Bringing optimism and passion to the job, Cauley personifies the hungry graduate student looking for an angle to give him the edge on the path to a fulfilling career. “They say the best way to get a job in a museum is to work in a museum,” he says. “One thing I didn’t expect, however, was how much fun it would be preserving old cars and having a hand in making them run.”

Cauley is now on the lookout for a Ford Model A of his own. And that’s all part of Conrad’s larger plan for collection interns of the future. “Beyond simply giving them the skills to go out into the workforce,” Conrad says, “we’re looking to inspire the next generation. These old cars get in your blood, and the best way to ensure that is to put young people behind the wheel.”