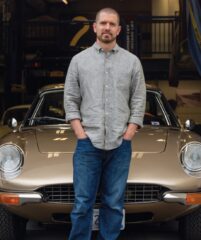 Randy Elber has traveled a long way from the beater LeMans he transformed in a friend’s garage.

From Randy Elber’s place in Mount Kisco, New York, it’s a 45-minute drive to Fishkill. For the entire trip, Randy can’t keep the smile off his face, because he knows what awaits him. Just off U.S. Route 9 is a small junkyard with a yellow metal warehouse in the middle of it, and inside that sits the long-dormant 1955 Mercedes-Benz 300SL Gullwing that Randy will be trailering back to his shop, R&R Auto Restorations, to begin its resurrection.

Cars grabbed 33-year-old Randy Elber early on. He loved their looks and the sounds they made. At 13, with every penny he had, the native Clevelander bought a 1968 Pontiac LeMans and proceeded to make a GTO clone out of it.

A friend’s father, Auguste “Gus” Trzop, became a mentor. Trzop was a dyed-in-the-wool hot rodder, and his 1971 Corvette was an inspiration to Randy. “Gus had a workshop off the back of his garage where he worked on his Vette, and I liked to hang out there and watch him work,” Randy says.

Randy’s Pontiac lived at his house for a while, and then it, too, ended up in Trzop’s workshop.

“That’s when everything started coming together for me,” he says. “I got hands-on experience and guidance under Gus and began the restoration of my $670 LeMans.”

Over the next couple of years, everything Randy could do himself, he did. He scoured junkyards for parts to rebuild. He built up a Chevy engine, because it was two grand cheaper than a Pontiac. He got his Goat clone painted, and he rechromed the bumper. Just shy of his 17th birthday, Randy took his first drive. The car had no carpets, no door panels, no door glass, but it was perfect.

By the time he finished it, the GTO was almost too perfect. “I got pulled over more than 20 times that first month,” Randy says. “The local cops thought I’d sneaked out my dad’s car for some joy riding. But my shtick was always the same: ‘Yeah, it’s my car. Yeah, I built it myself. Yeah, it’s loud.’ ”

Randy soon got accepted into the mechanical engineering program at the University of Cincinnati, and he sold the Pontiac. Although he didn’t know it at the time, that car and the work he put into it shaped what he wanted to do with his life. In December of his senior year of high school, a piece in the Cleveland Plain Dealer helped him realize his goal.

The story was about Jay Leno’s endowing a scholarship through Hagerty’s Collectors Foundation—precursor to today’s RPM Foundation—for automobile restoration at tiny McPherson College in Kansas. Within a two-week period, everything changed for Randy. “I checked out the McPherson website a bunch of times. I made a few phone calls. Without setting foot on campus for a visit, I knew it was the place for me.”

Randy dove headfirst into the program at McPherson, which included business as well as restoration coursework. “Each class was total immersion in one facet of the industry. Not only could I rebuild a car, I knew what to bill for it.” His hard work during his first year paid off, and for his sophomore year, Randy got a partial scholarship from the Collectors Foundation. He would follow that up with a full scholarship from Mercedes for his junior year. In 2005, he became the first McPherson student to get an internship at Paul Russell and Company, a shop in Essex, Massachusetts, renowned for its work on European classics. It was exactly the type of work Randy wanted to be a part of. He returned to Paul Russell for another internship in 2006, and by summer’s end, he had a job lined up after graduation the following year.

Once he settled in professionally at Paul Russell, Randy delved deeply into the world of postwar BMWs, Ferraris, and, particularly, 300SL Mercedes, where he worked on everything from basket-case roadsters in boxes to one of the 29 alloy-bodied Gullwings. “I got intimately involved with every nut, bolt, and gear that makes up a 300SL. And I loved resurrecting cars from the ashes and breathing life back into them.”

By 2014, a long-distance relationship that could no longer be managed long distance meant it was time to move on. After nearly a decade at Paul Russell, Randy moved to White Plains, New York, and took a job at Automotive Restorations. “One of my first projects there was a Gullwing that had been entered to run the Mille Miglia in May 2016. It belonged to the Audrain Automobile Museum in Rhode Island and had good history, but it wasn’t in a good mechanical place.” The time frame was aggressive, and Randy rebuilt the engine, suspension, axles, and wiring—all of which had to be period correct. “It was a wonderful feeling to know the car was going to be used and not just put away in a glass bubble.” Once the 300SL hit Italy, it put in 1000 flawless miles.

Randy’s involvement with the Audrain deepened, as did his family commitments, and by 2017, he’d relocated to Rhode Island to work directly with the museum. “The collection was big and varied,” he says. “The Gullwing was there, plus a lot of Ferraris and prewar American iron, and I was tuning cars by ear as well as by computer.” Soon he was curating the growing collection, too.

Since his McPherson days, however, Randy had envisioned having his own shop. Every part of the process and the people interested him. Then he met Bob Torre, Jr., who had come to a shop on Long Island where Elber was working in search of a 300SL roadster. “The salesman wasn’t available, so I went over the car with him,” Randy says. “I asked what his expectations were and how he wanted to use the car. We pored over it and in the end agreed it wasn’t the right Mercedes for him.” But it led to more.

Randy learned that Torre’s collection was 15 minutes from his home, so he paid a visit. Torre mentioned he’d always wanted to have a restoration shop, that he loved to work on his own cars but was not at the level to spearhead a professional facility. What he did have were the space and years of small-business experience. Randy had the years of knowledge from working in top shops, and he had a business plan.

It seemed only natural the two men would go into business together, and in 2018 they opened R&R Auto Restorations in Mount Kisco.  Within weeks of opening its doors, R&R had all the right cars in the building: Mercedes, Ferrari, Lamborghini, and Porsche.  In Randy Elber, the kid who long ago gell in love with cars, R&R had the right guy, too.